Ladies, this is for you.

I will preface with stating that I am an amateur trad climber.  At this current point in time, I can count the number of trad climbs I’ve personally led on two hands. I’ve got plans in the works to change that, but more importantly, this post isn’t necessarily about how to proficiently trad climb.  I would recommend seeking expert knowledge for that, but more on that later. This post is for ladies out there that may spend their weekends following their partner (usually tends to be male) on some sketchy one-star trad multi pitch and wish that they could pick out the climb next time, or maybe they look at a photo of a cool desert tower and wonder how they could ever be able to summit that thing on their own. Or maybe the idea of trad climbing sounds plain terrifying to you and that’s fine too.

I can relate with all of the above, and it took me awhile to talk myself into trying trad leading. After a year or so of gym climbing, my boyfriend immediately started reading up more on trad climbing.  He, like many guys, was most intrigued by all of the gear involved with trad, and thoroughly enjoyed the excuse to “invest” in hundreds of dollars worth of climbing hardware (aka new toys to fiddle with).   At this point, I was definitely the more conservative climber. I was still fearful of even lead climbing on bolts, much less gear that I had to place myself. I am also extremely budget conscious and could not imagine myself ever spending that much on a single cam (now, putting down $ on a pair of Madewell jeans…that’s another story).  That mindset has since shifted a little, but again, it took a while.

We spent one of our first real outdoor climbing trips at Joshua Tree, laughably probably one of the worst climbing destinations for a couple of fledgling climbers. As many of the “sport” climbs contain run outs of 20 feet or more, Dustin ended up with plenty of opportunities to place his new gear into the copious cracks. It was like a door opened for him, and suddenly literally thousands of climbing opportunities presented themselves to him.

He became hooked, and starting primarily leading trad over sport whenever we went outdoors after that.  I followed behind him, learning how to remove the cams, nuts, tricams, and hexes. I realized that following someone on a trad climb was almost just as much work as leading. However, I was proud of him and just felt grateful for the opportunity to climb outside.

I will pause here and say that following can be super fulfilling to a vast amount of climbers. However, for many other climbers, there comes a point when you might want to learn to tackle the sharp end, at least once.

I felt this. After 2 or so years of following Dustin up climbs, I realized that I wanted to push myself more in this scary male-dominated arena.  Mostly I wanted to be able to pick out my own climbs when we traveled to a trad climbing destination, instead of coaxing Dustin to consider leading the climbs that I thought looked cool.  Come on, I KNOW you can climb this tower. The gear doesn’t look that bad. Please…..

At this point, I was starting to feel a little more confident sport climbing outdoors, and was breaking into 5.10s.  I say this to emphasize that you don’t have to necessarily be a strong climber to start delving into trad. My local trad climbing destination, Seneca Rocks, has a couple extremely popular 5.2 multi pitch trad routes that climb like a rock scramble. However, that isn’t to take away from the requirement for knowledge about sgear placements, self-rescue, and rope management.  It just illustrates that trad climbing might be more accessible than we think it is.

Here are some steps I took prior to my first trad lead that I think helped my confidence immensely:

1) Once I decided I wanted to start leading trad, I figured it was a good idea to learn some basic self-rescue techniques as well. This definitely helped my confidence with being able to take over responsibility as a leader. I actually think ALL outdoor climbers could benefit from this knowledge, but as many trad climbs are multipitch scenarios, it is super important to know what to do when things go unexpected.  I took it on myself to learn a new self-rescue technique every couple of weeks, and was usually able to improvise and practice at home. This book is super helpful and I highly recommend it as a basic self-rescue guide.

2) I also invested my tax refund last year and signed up for a 2-day intro to trad leading course through a local guide company at Seneca Rocks.  Here, I was able to practice mock trad-leading in multipitch scenarios, as well as setting my own anchors. This class did a ton for my confidence!  If you are looking to find your local guide company, the AMGA is a good resource to look into.  Trad leading courses are not inexpensive, but they usually are pretty valuable and well worth the money. I justified the cost to myself as “the cost of being able to safely protect my own life” when I did start leading.

3) Lastly, I followed trad climbs as much as I possibly could, and often mock led on top rope if I had the opportunity.  As Dustin wasn’t always available, I ended up partnering with older local trad climbers as well. The cool thing about puttingmyself out there was that I end up finding a wonderful female old-school trad mentor who wanted a proficient, regular partner for outdoor trips.

My actual first trad lead was totally unexpected. I talk about it more in depth here, but on a trip with Dustin to the Red River Gorge, I realized there was a 5.3 trad climb right beside a moderate sport climb we had just cleaned, and I decided to try and lead it.  I felt confident since I knew the terrain was easy, and the route itself was a giant crack which offered plenty of opportunities for cam placements.

Since then, I’ve led trad at various other crags, and its been awesome. It opens up literally thousands of climbs that previously were inaccessible to me as a timid little sporty spice. Additionally, its a nice skill to have on holiday weekends when the crag is packed with other climbers (usually there’s a good chance that a gear route will be open).  Another benefit is that after climbing trad, sport climbing seems a whole lot less scary.

Lastly, one last tip I’ve picked up pretty quickly is this:

Even if a trad climb‘s difficulty is rated easy, ALWAYS do your research before climbing.  If it has one or zero stars on Mountain Project, there’s a good chance that it doesn’t have quality gear placements. Sometimes its safer to climb the harder route next to it if the gear placement opportunities are better.

And with that, happy climbing! 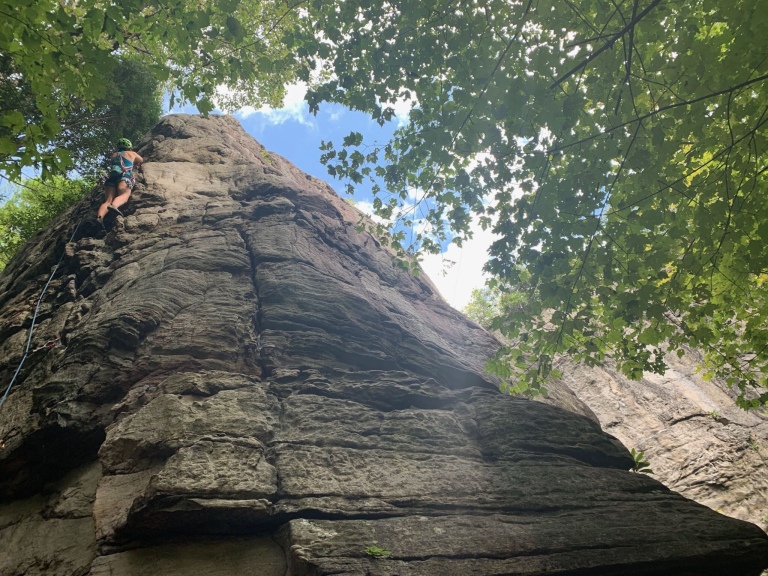 Getting my trad on at the NRG, the absolute best place for trad on the east coast.

One thought on “How to Get into Trad Climbing for the Fierce Independent Female Who Doesn’t Need a Man to Follow. ”